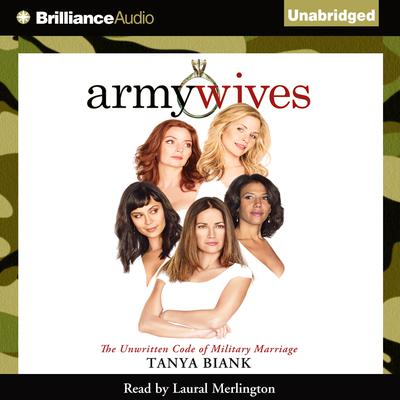 The Unwritten Code of Military Marriage

Army Wives goes beyond the sound bites and photo ops of military life to bring listeners into the hearts and homes of today’s military wives.

Biank tells the story of four typical army wives who, in a flash, find themselves in extraordinary circumstances that ultimately force them to redefine who they are as women and wives. This is a true story about what happens when real life collides with army convention.

Army Wives is a groundbreaking narrative that takes the listener beyond the army’s gates, taking a close look at the other woman – the army itself – and how its traditions, rules, and wartime realities deeply impact marriage and home life.

“A timely look at the impact of combat and military life on the families the soldiers leave behind.” - The Washington Post

“Tanya Biank has written a stunningly detailed, eye-opening account of what it is really like to be an army wife. Army Wives demonstrates that while it is tough to be a soldier, it can be even tougher to be the wife of a soldier. Army Wives should be required reading for every military spouse and all those who are considering marrying into the military.” – Ron Martz, military affairs correspondent, Atlanta Journal-Constitution and coauthor of Heavy Metal: A Tank Company’s Battle to Baghdad