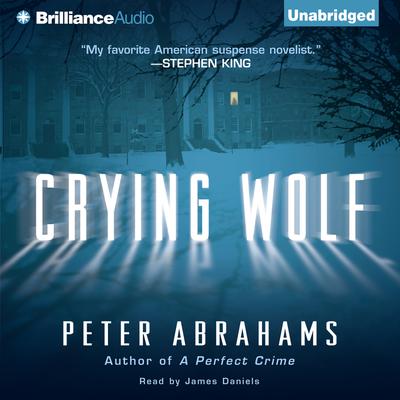 It was more than a white lie. It was deception on a grand scale. But the motive was admirable—to save the bright future of a deserving young man. And the victim, too, was deserving—an arrogant billionaire who would hardly notice his loss, crumbs from a vast fortune. All the plotters needed was a believable story, desperate and frightening, but false. Nothing bad was supposed to happen. They were only crying wolf. But what if the wolf were real?

For Nat, a shining all-American boy with blue-collar roots, acceptance to New England's exclusive Inverness College seems like the opportunity of a lifetime. The chilling events that follow are nothing like what he imagined.

It begins at Christmas break. Nat, unable to afford going home for the holidays, remains alone on the deserted campus. Alone—until he meets Grace and Izzie Zorn, twin sisters who, although biologically identical, are utterly different. Thrown off by the irresistible attraction of this astonishing pair, Nat's moral compass starts to fail him. How could it not, as he enters a seductive new world of private Caribbean islands, personal jets, and endless possibility? A world where folly, even crime, now seems right.

When classes resume, Nat and the twins fall under the influence of a charismatic philosophy professor with dangerous ideas and a secret of his own. His teachings will be used to justify a bold scheme, plotted deep beneath the school in the lair of a forgotten social club, banished for almost a century.

But someone in the underground shadows is listening, someone who thinks he deserves a future just as bright as Nat's. Suddenly a risky but basically innocent game will take a horrifying turn.