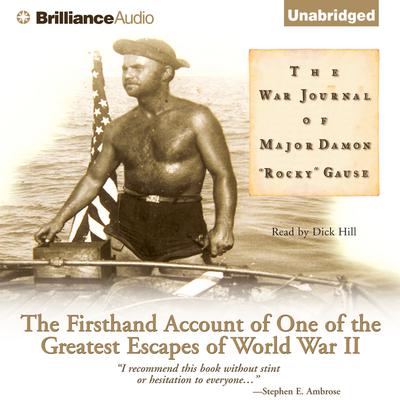 Of all the heroic stories to come out of World War II, few are as extraordinary as that of Major Rocky Gause, who was captured by the Japanese, escaped from the infamous Bataan Death March, and, with a fellow soldier, endured a harrowing voyage across the enemy-held Pacific in a leaky, hand-crafted boat.

In the battered notebook he kept throughout his journey, Gause traced his steps from the besieged city of Manila on New Year's Eve, 1941, to his safe landing on the Australian coast ten months later. In spare and vivid prose, Gause wrote of a voyage on which he encountered a savage two-day typhoon, a treacherous Nazi collaborator, numerous enemy ships, and a final strafing that set his boat on fire just before landfall. His compelling vignettes document the heroism of the men who fought and died beside him, and bring to life an important chapter in World War II history.

Tragically, Gause was killed a year later in a plane crash over London, but his remarkable account, recovered from Gause's footlocker by the son who never knew him, will live on as a testament to the power of the human spirit in a time when heroes are all too hard to find.