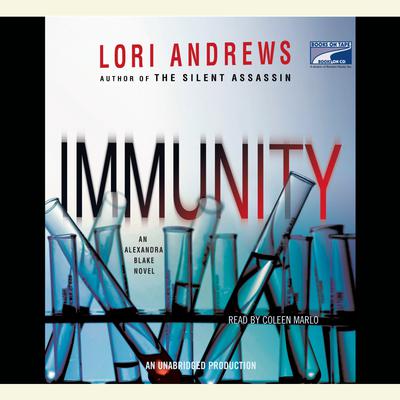 One bizarre death is just that---a death. Two? Could be a coincidence. But in Lori Andrews’s latest thriller, geneticist Dr. Alexandra Blake discovers something much more dangerous than a killer---an epidemic.

Taking a break from decoding the genetic sequence of a tropical disease, Alex takes on an investigation into the gruesome and unexplained death of a DEA agent on a mob stakeout in New Mexico. Within hours, she uncovers similar deaths throughout the Southwest. Is it a naturally occurring epidemic or has a lethal bioweapon been released in the United States?

With the nation’s attention focused on a provocative presidential race, Alex’s attempts to warn Homeland Security fail. Only with the help of a rogue DEA agent and a cutting-edge supercomputer will she and the rest of her team at the Armed Forces Institute of Pathology stand a chance of putting an end to the devastation before public hysteria rages out of control.

From Alex’s lab to the closed rooms of a killer’s mind, IMMUNITY maps the perfect sequence for an infectious, edge-of-your-seat thriller.