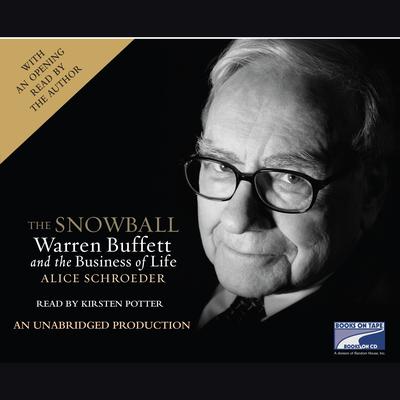 Warren Buffett and the Business of Life

Here is the book recounting the life and times of one of the most respected men in the world, Warren Buffett. The legendary Omaha investor has never written a memoir, but now he has allowed one writer, Alice Schroeder, unprecedented access to explore directly with him and with those closest to him his work, opinions, struggles, triumphs, follies, and wisdom.

Although the media track him constantly, Buffett himself has never told his full life story. His reality is private, especially by celebrity standards. Indeed, while the homespun persona that the public sees is true as far as it goes, it goes only so far. Warren Buffett is an array of paradoxes. He set out to prove that nice guys can finish first. Over the years he treated his investors as partners, acted as their steward, and championed honesty as an investor, CEO, board member, essayist, and speaker. At the same time he became the world’s richest man, all from the modest Omaha headquarters of his company Berkshire Hathaway. None of this fits the term “simple.”

When Alice Schroeder met Warren Buffett she was an insurance industry analyst and a gifted writer known for her keen perception and business acumen. Her writings on finance impressed him, and as she came to know him she realized that while much had been written on the subject of his investing style, no one had moved beyond that to explore his larger philosophy, which is bound up in a complex personality and the details of his life. Out of this came his decision to cooperate with her on the book about himself that he would never write.

Never before has Buffett spent countless hours responding to a writer’s questions, talking, giving complete access to his wife, children, friends, and business associates—opening his files, recalling his childhood. It was an act of courage, as The Snowball makes immensely clear. Being human, his own life, like most lives, has been a mix of strengths and frailties. Yet notable though his wealth may be, Buffett’s legacy will not be his ranking on the scorecard of wealth; it will be his principles and ideas that have enriched people’s lives. This book tells you why Warren Buffett is the most fascinating American success story of our time.

Praise for The Snowball

“Even people who don't care a whit about business will be intrigued by this portrait. . . . Schroeder, a former insurance-industry analyst, spent years interviewing Buffett, and the result is a side of the Oracle of Omaha that has rarely been seen.”—Time

“Will mesmerize anyone interested in who Mr. Buffett is or how he got that way. The Snowball tells a fascinating story.”—New York Times

“If the replication of any great achievement first requires knowledge of how it was done, then The Snowball, the most detailed glimpse inside Warren Buffett and his world that we likely will ever get, should become a Bible for capitalists.”—Washington Post

“A monumental biography . . . Schroeder got the best access yet of any Buffett biographer. . . . She deals out marvelously funny and poignant stories about Buffett and the conglomerate he runs, Berkshire Hathaway.”—Forbes

“The most authoritative portrait of one of the most important American investors of our time.”—Los Angeles Times