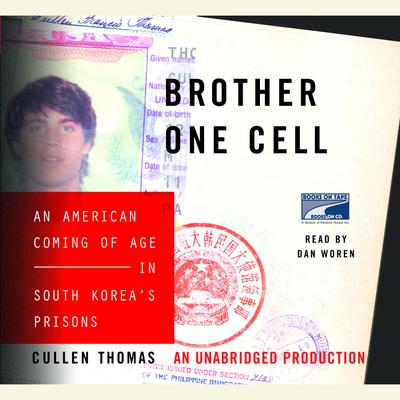 An American Coming of Age in South Korea's Prisons

Cullen Thomas had a typical suburban upbringing. He was raised on Long Island, and after graduating from college he was looking for meaning and excitement. Possessed of a youthful, romantic view of the world, he left New York at age twenty-three and set off for a job teaching English in Seoul, South Korea. As foreigners on the fringe of Korean society, Cullen and his friends felt intensely separate, then untouchable. That delusion was quickly shattered. Cullen would spend four years in the country: seven months teaching, then three and a half years in jail for smuggling hashish. BROTHER ONE CELL is his memoir of that time–the harrowing and powerful story of a young American learning hard lessons in strange prisons on the other side of the world.

One of few foreign inmates, Cullen shared a cell block with human traffickers, jewel smugglers, murderers, and thieves. Humbled by the ordeal, he describes his fight to restore his identity and to come to terms with the harsh living conditions and the rules of Korea’s strict Confucian culture, which were magnified in prison. In this crucible Cullen shed the naïveté and ego of youth and to his surprise achieved a lasting sense of freedom and gratitude. With its gritty descriptions of life behind high walls and acute insights into Korean society, BROTHER ONE CELL is part cautionary tale and part insightful travelogue about places few of us will ever see.