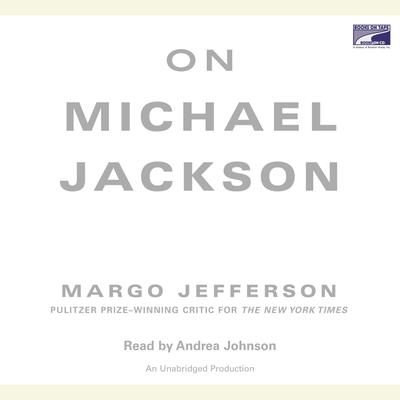 Michael Jackson was once universally acclaimed as a song-and-dance man of genius; Wacko Jacko is now, more often than not, dismissed for his bizarre race and gender transformations and confounding antics, even as he is commonly reviled for the child molestation charges twice brought against him. Whence the weirdness and alleged criminality? How to account for Michael Jackson’s rise and fall? In On Michael Jackson—an at once passionate, incisive, and bracing work of cultural analysis—Pulitzer Prize–winning critic for The New York Times Margo Jefferson brilliantly unravels the complexities of one of the most enigmatic figures of our time.

Who is Michael Jackson and what does it mean to call him a “What Is It”? What do P. T. Barnum, Peter Pan, and Edgar Allan Poe have to do with our fascination with Jackson? How did his curious Victorian upbringing and his tenure as a child prodigy on the “chitlin’ circuit” inform his character and multiplicity of selves? How is Michael Jackson’s celebrity related to the outrageous popularity of nineteenth-century minstrelsy? What is the perverse appeal of child stars for grown-ups and what is the price of such stardom for these children and for us? What uncanniness provoked Michael Jackson to become “Alone of All His Race, Alone of All Her Sex,” while establishing himself as an undeniably great performer with neo-Gothic, dandy proclivities and a producer of visionary music videos? What do we find so unnerving about Michael Jackson’s presumed monstrosity? In short, how are we all of us implicated?

In her stunning first book, Margo Jefferson gives us the incontrovertible lowdown on call-him-what-you-wish; she offers a powerful reckoning with a quintessential, richly allusive signifier of American society and popular culture.