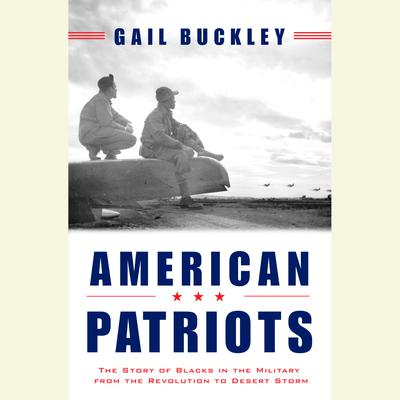 American Patriots is one of the great untold stories in American history. There have been books on individual black soldiers, but this is the first to tell the full story of the black American military experience, starting with the Revolution and culminating with Desert Storm.

The best histories are about more than facts and events — they capture the spirit that drives men to better their lives and to demand of themselves the highest form of sacrifice. That spirit permeates Gail Buckley’s dramatic, deeply moving, and inspiring book. You’ll meet the men who fought in the decisive engagements of the Revolution, the legendary Buffalo soldiers, and the heroic black regiments of the Civil War. You’ll meet some of America’s greatest patriots — men who fought in the First and Second World Wars when their country denied them access to equipment and training, segregated the ranks, and did all it could to keep them off the battlefield. You’ll meet the heroes of Korea, Vietnam, and Desert Storm. And you’ll meet two families, the Lews and the Pierces, who have served in every American engagement since the Revolution.

FDR used to say that Americanism was a matter of the mind and heart, not of race and ancestry. With photographs throughout and dozens of original interviews with veterans, American Patriots is a tribute to the black American men and women who fought and gave their lives in the service of that ideal.