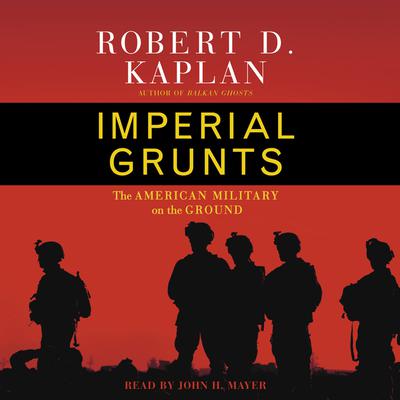 On the Ground with the American Military, from Mongolia to the Philippines to Iraq and Beyond...

A fascinating, unprecedented first-hand look at the soldiers on the front lines on the Global War on Terror.

Plunging deep into midst of some of the hottest conflicts on the globe, Robert D. Kaplan takes us through mud and jungle, desert and dirt to the men and women on the ground who are leading the charge against threats to American security. These soldiers, fighting in thick Colombian jungles or on dusty Afghani plains, are the forefront of the new American foreign policy, a policy being implemented one soldier at a time. As Kaplan brings us inside their thoughts, feelings, and operations, these modern grunts provide insight and understanding into the War on Terror, bringing the war, which sometimes seems so distant, vividly to life.

“Robert Kaplan has brilliantly captured the story of today’s U.S. military operating in far-flung places on strange missions. Imperial Grunts is the most insightful and superbly written account of soldiering in the New World Disorder to date. It is a must read for all Americans.”—General Anthony C. Zinni, United States Marine Corps (Ret.)

“Kaplan infuses us with a sense of hope about the future. Through astonishing observations, truths, and stories, Imperial Grunts introduces a brand-new way of thinking about the enduring virtue of the American spirit.”—George Crile, author of Charlie Wilson’s War

“No recent book so well or so vividly portrays the challenges of the modern United States military. With an impressive grasp of the complexities of military missions worldwide, Robert Kaplan exposes the reader to the world of the modern soldier, sailor, airman, and Marine. A must read for both civilian and military leaders.”—General Barry R. McCaffrey, United States Army (Ret.), Bradley Distinguished Professor of International Security Studies, United States Military Academy