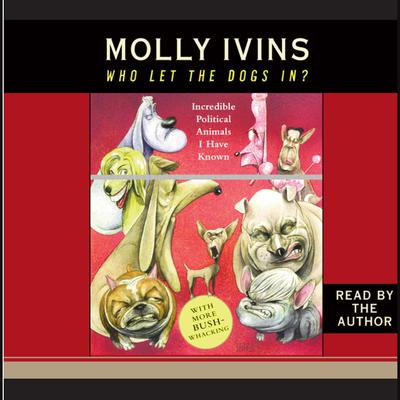 Who Let the Dogs In?

Incredible Political Animals I Have Known

The dazzling, inimitable Molly Ivins is back, with her own personal Hall of Fame of America’s most amazing and outlandish politicians–the wicked, the wise, the witty, and the witless–drawn from more than twenty years of reporting on the folks who attempt to run our government (in some cases, into the ground).

Who Let the Dogs In? takes us on a wild ride through two decades of political life, from Ronald Reagan, through Big George and Bill Clinton, to our current top dog, known to Ivins readers simply as Dubya. But those are just a few of the political animals who are honored and skewered for our amusement. Ivins also writes hilariously, perceptively, and at times witheringly of John Ashcroft, Dick Cheney, Donald Rumsfeld, H. Ross Perot, Tom DeLay, Ann Richards, Al Gore, Jimmy Carter, and the current governor of Texas, who is known as Rick “Goodhair” Perry.
Following close on the heels of her phenomenally successful Bushwhacked and containing an up-to-the-minute Introduction for the campaign season, Who Let the Dogs In? is political writing at its best.