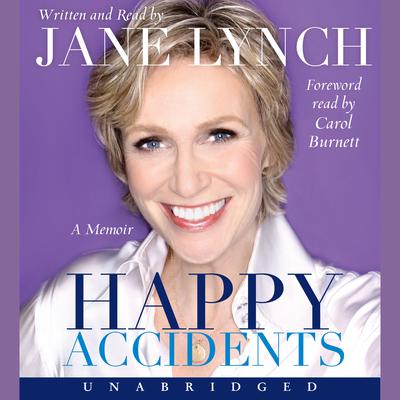 In the summer of 1974, a fourteen-year-old girl in Dolton, Illinois, had a dream. A dream to become an actress, like her idols Ron Howard and Vicki Lawrence. But it was a long way from the South Side of Chicago to Hollywood, and it didn’t help that she’d recently dropped out of the school play, The Ugly Duckling. Or that the Hollywood casting directors she wrote to replied that “professional training was a requirement.”

But the funny thing is, it all came true. Through a series of happy accidents, Jane Lynch created an improbable—and hilarious—path to success. In those early years, despite her dreams, she was also consumed with anxiety, feeling out of place in both her body and her family. To deal with her worries about her sexuality, she escaped in positive ways—such as joining a high school chorus not unlike the one in Glee—but also found destructive outlets. She started drinking almost every night her freshman year of high school and developed a mean and judgmental streak that turned her into a real-life Sue Sylvester.

Then, at thirty-one, she started to get her life together. She was finally able to embrace her sexuality, come out to her parents, and quit drinking for good. Soon after, a Frosted Flakes commercial and a chance meeting in a coffee shop led to a role in the Christopher Guest movie Best in Show, which helped her get cast in The 40-Year-Old Virgin. Similar coincidences and chance meetings led to roles in movies starring Will Ferrell, Paul Rudd, and even Meryl Streep in 2009’s Julie & Julia. Then, of course, came the two lucky accidents that truly changed her life. Getting lost in a hotel led to an introduction to her future wife, Lara. Then, a series she’d signed up for abruptly got canceled, making it possible for her to take the role of Sue Sylvester in Glee, which made her a megastar.

Today, Jane Lynch has finally found the contentment she thought she’d never have. Part comic memoir and part inspirational narrative, this is a book equally for the rabid Glee fan and for anyone who needs a new perspective on life, love, and success.

WITH A FOREWORD BY CAROL BURNETT

If I could go back in time and talk to my twenty-year-old self, the first thing I would say is: “Lose the perm.” Secondly I would say: “Relax. Really. Just relax. Don’t sweat it.”

I can’t remember a time when I wasn’t anxious and fearful that the parade would pass me by. And I was sure there was someone or something outside of myself with all the answers. I had a driving, anxiety-filled ambition. I wanted to be a working actor so badly. I wanted to belong and feel like I was valued and seen. Well, now I am a working actor, and I guarantee you it’s not because I suffered or worried over it.

As I look back, the road to where I am today has been a series of happy accidents I was either smart or stupid enough to take advantage of. I thought I had to have a plan, a strategy. Turns out I just had to be ready and willing to take chances, look at what’s right in front of me, and put my heart into everything I do. All that anxiety and fear didn’t help, nor did it fuel anything useful. My final piece of advice to twenty-year-old me: Be easy on your sweet self. And don’t drink Miller Lite tall boys in the morning.