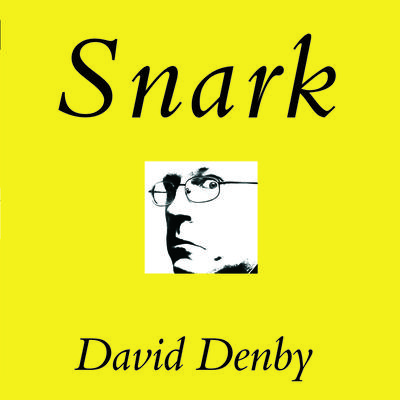 What is snark? You recognize it when you see it—a tone of teasing, snide, undermining abuse, nasty and knowing, that is spreading like pinkeye through the media and threatening to take over how Americans converse with each other and what they can count on as true. Snark attempts to steal someone's mojo, erase her cool, annihilate her effectiveness. In this sharp and witty polemic, New Yorker critic and bestselling author David Denby takes on the snarkers, naming the nine principles of snark—the standard techniques its practitioners use to poison their arrows. Snarkers like to think they are deploying wit, but mostly they are exposing the seethe and snarl of an unhappy country, releasing bad feeling but little laughter. In this highly entertaining book, Denby traces the history of snark through the ages, starting with its invention as personal insult in the drinking clubs of ancient Athens, tracking its development all the way to the age of the Internet, where it has become the sole purpose and style of many media, political, and celebrity Web sites. Snark releases the anguish of the dispossessed, envious, and frightened; it flows when a dying class of the powerful struggles to keep the barbarians outside the gates, or, alternately, when those outsiders want to take over the halls of the powerful and expel the office-holders. Snark was behind the London-based magazine Private Eye, launched amid the dying embers of the British empire in 1961; it was also central to the career-hungry, New York–based magazine Spy. It has flourished over the years in the works of everyone from the startling Roman poet Juvenal to Alexander Pope to Tom Wolfe to a million commenters snarling at other people behind handles. Thanks to the grand dame of snark, it has a prominent place twice a week on the opinion page of the New York Times. Denby has fun snarking the snarkers, expelling the bums and promoting the true wits, but he is also making a serious point: the Internet has put snark on steroids. In politics, snark means the lowest, most insinuating and insulting side can win. For the young, a savage piece of gossip could ruin a reputation and possibly a future career. And for all of us, snark just sucks the humor out of life. Denby defends the right of any of us to be cruel but shows us how the real pros pull it off. Snark, he says, is for the amateurs.