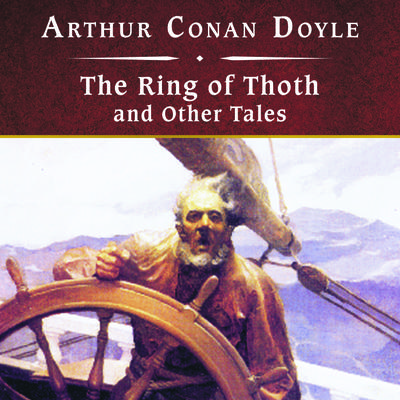 The Ring of Thoth and Other Tales, with eBook

In "The Ring of Thoth," Mr. John Vansittart Smith, a British student of Egyptology, goes to the Egyptian Room of the Louvre to study. There he meets a curious looking attendant, but he is otherwise alone in the great hall. Not long afterwards, the quiet surroundings and his inability to concentrate cause him to drift off to sleep. When Smith wakes, it is the middle of the night and he is locked inside the darkened museum. Soon he becomes aware that someone else is there, too. A mysterious figure holding a light has come into the hall and opened the case of one of the mummies. Smith realizes that it is the attendant that he saw earlier in the day, and as he watches from the shadows, he becomes involved in the extraordinary story of the ring of Thoth.

In addition to "The Ring of Thoth," this collection of short stories by the masterful Arthur Conan Doyle contains "The Captain of the Polestar," "J. Habakuk Jephson's Statement," "The Great Kleinplatz Experiment," "The Man from Archangel," "That Little Square Box," "John Huxford's Hiatus," "A Literary Mosaic," "John Barrington Cowles," and "Elias B. Hopkins."