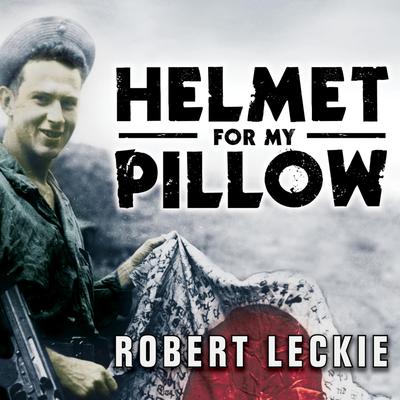 Helmet for My Pillow

From Parris Island to the Pacific

Here is one of the most riveting first-person accounts ever to come out of World War II. Robert Leckie enlisted in the United States Marine Corps in January 1942, shortly after the Japanese attack on Pearl Harbor. In Helmet for My Pillow, we follow his odyssey, from basic training on Parris Island, South Carolina, all the way to the raging battles in the Pacific, where some of the war's fiercest fighting took place. Recounting his service with the 1st Marine Division and the brutal action on Guadalcanal, New Britain, and Peleliu, Leckie spares no detail of the horrors and sacrifices of war, painting an unvarnished portrait of how real warriors are made, fight, and often die in the defense of their country.

From the live-for-today rowdiness of marines on leave to the terrors of jungle warfare against an enemy determined to fight to the last man, Leckie describes what war is really like when victory can only be measured inch by bloody inch. Woven throughout are Leckie's hard-won, eloquent, and thoroughly unsentimental meditations on the meaning of war and why we fight. Unparalleled in its immediacy and accuracy, Helmet for My Pillow will leave no one untouched. This is a book that brings you as close to the mud, the blood, and the experience of war as it is safe to come.

Now producers Tom Hanks, Steven Spielberg, and Gary Goetzman, the men behind Band of Brothers, have adapted material from Helmet for My Pillow for HBO's epic miniseries The Pacific, which will thrill and edify a whole new generation.