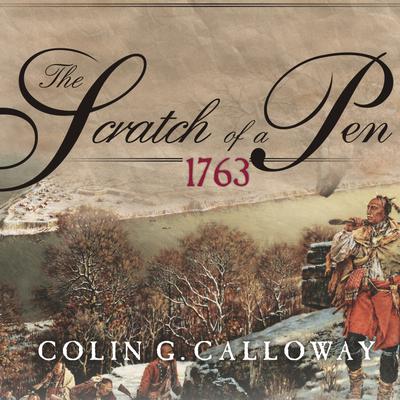 The Scratch of a Pen

1763 and the Transformation of North America

In February 1763, Britain, Spain, and France signed the Treaty of Paris, ending the French and Indian War. In this one document, more American territory changed hands than in any treaty before or since. As the great historian Francis Parkman wrote, "half a continent...changed hands at the scratch of a pen." As Colin Calloway reveals in this superb history, the Treaty set in motion a cascade of unexpected consequences. Indians and Europeans, settlers and frontiersmen, all struggled to adapt to new boundaries, new alignments, and new relationships. Britain now possessed a vast American empire stretching from Canada to the Florida Keys, yet the crushing costs of maintaining it would push its colonies toward rebellion. White settlers, free to pour into the West, clashed as never before with Indian tribes struggling to defend their way of life. In the Northwest, Pontiac's War brought racial conflict to its bitterest level so far. Whole ethnic groups migrated, sometimes across the continent: it was 1763 that saw many exiled settlers from Acadia in French Canada move again to Louisiana, where they would become Cajuns. Calloway unfurls this panoramic canvas with vibrant narrative skill, peopling his tale with memorable characters such as William Johnson, the Irish baronet who moved between Indian campfires and British barracks; Pontiac, the charismatic Ottawa chieftain whose warriors, for a time, chased the Europeans from Indian country; and James Murray, Britain's first governor in Quebec, who fought to protect the religious rights of his French Catholic subjects. Most Americans know the significance of the Declaration of Independence or the Emancipation Proclamation, but not the Treaty of Paris. Yet 1763 was a year that shaped our history just as decisively as 1776 or 1862. This captivating book shows why.