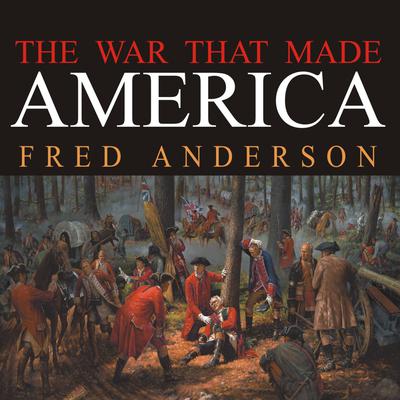 The War That Made America

A Short History of the French and Indian War

Apart from The Last of the Mohicans, most Americans know little of the French and Indian War-also known as the Seven Years' War-and yet it remains one of the most fascinating periods in our history. In January 2006, PBS will air The War That Made America, a four-part documentary about this epic conflict. Fred Anderson, the award-winning and critically acclaimed historian, has written the official tie-in to this exciting television event.

In The War That Made America, Anderson deftly shows how the expansion of the British colonies into French territory in the 1750s and the ongoing Native American struggle for survival would erupt into seven years of bloodshed and unrest spreading from the backwoods of Pennsylvania to the high courts of Europe, eventually overturning the balance of power on two continents and laying the groundwork for the American Revolution. Beautifully illustrated, richly detailed, and utterly compelling, this is the story of how America as we know it today emerged from a series of fractured colonies and warring tribes into a nation ripe for independence-and nobody tells this story better than Fred Anderson.

"Overall, this work is an excellent introduction to a complex, dynamic conflict that set the stage for the American Revolution. Recommended for all libraries."—Library Journal

"Lucid and swift-moving. With luck, Anderson's book will awaken interest in a critically important period in colonial history that, he laments, is about as familiar now as the Peloponnesian War."—Kirkus Review

"Like the best popular historians, Anderson combines exhaustive research and an accessible prose style in a volume that should help rescue the French and Indian War from historical obscurity."—Publishers Weekly

"...(Anderson's) writing is fluid, energetic, and gripping and his exploration of this period in early American history is unforgettable. His book is brought to life in this unabridged audio recording by Simon Vance, a British actor and skilled reader who has recorded more than 200 audiobooks."—Reviewed by Sheldon Ztvordokov, Large Print Reviews

"Simon Vance handles this complex narrative with a stately intelligence...He pronounces the many Native American place names and French-Canadian phrases with ease. Look for a young George Washington, who learns a number of valuable lessons that will serve him well two decades later."—AudioFile Magazine