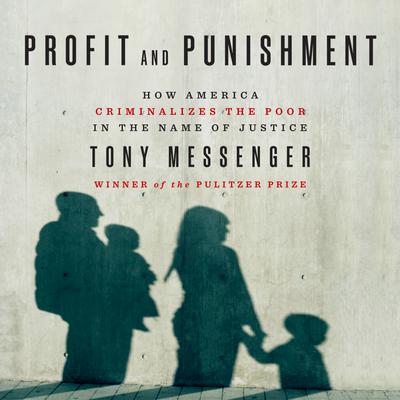 How America Criminalizes the Poor in the Name of Justice

"His Pulitzer Prize winning series on debtors' prisons in Missouri made a serious difference in real people's lives and his book will be a must read for a nation seeking a bipartisan path forward on criminal justice reform."
—Claire McCaskill, former US Senator and analyst for MSNBC

Profit and Punishment is the most comprehensive look at the criminalization of poverty in the U.S., joining a growing and popular genre that is making a difference. It is Charged meets Evicted, focusing on that touchstone issue of the criminal justice reform movement: the insidious use of fines and fees to raise money for broken government budgets off the backs of the poor, and the partnership those governments have formed with for-profit companies that are getting rich on the backs of people incarcerated for minor crimes.

In a feat of exceptional reporting, Profit and Punishment reveals a familiar reality to the nation's poor, anchored by the stories of three single mothers living in poverty, one in Oklahoma, one in Missouri, and one in South Carolina, who are abused by a judicial system more focused on debt collection than public safety.

All over the country, similar schemes are criminalizing the vulnerable and the poor, with the full support of politicians in both parties. The geography is Missouri, South Carolina, and Oklahoma. The story is American.

“When Tony Messenger writes about social justice issues, he is relentless in his pursuit of truth, particularly when the victims of a broken criminal justice system are disproportionately people of color.”
—DeRay McKesson, host of Pod Save the People and author of On the Other Side of Freedom