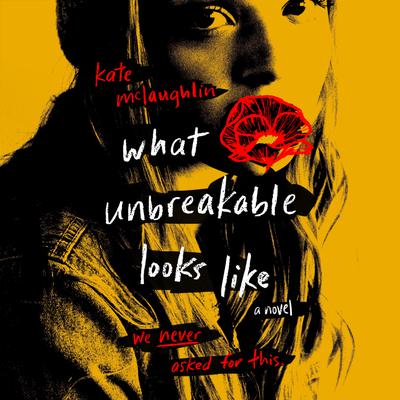 "Raw, unflinching, and authentic, Kate McLaughlin's thoughtful What Unbreakable Looks Like carefully crafts a story exposing the vulnerability of underage trafficked girls and what it takes to begin the process of healing from sexual trauma."–Christa Desir, author, advocate, and founding member of The Voices and Faces Project

Lex was taken–trafficked–and now she’s Poppy. Kept in a hotel with other girls, her old life is a distant memory. But when the girls are rescued, she doesn’t quite know how to be Lex again.

But when she is sexually assaulted by her so-called boyfriend and his friends, Lex is forced to reckon with what happened to her and that just because she is used to it, doesn’t mean it is okay. She’s thrust into the limelight and realizes she has the power to help others. But first she’ll have to confront the monsters of her past with the help of her family, friends, and a new love.

Kate McLaughlin’s What Unbreakable Looks Like is a gritty, ultimately hopeful novel about human trafficking through the lens of a girl who has escaped the life and learned to trust, not only others, but in herself.