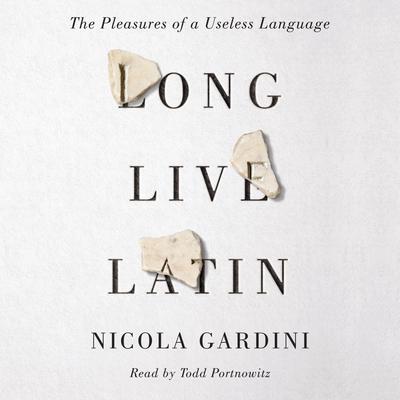 The Pleasures of a Useless Language

"It's a genuine pleasure to hear spoken Latin--lots of it, and by many of the great classical authors, including Cicero, Ovid, and Virgil--and to follow the story of Gardini's lifelong infatuation with a language that is nowhere and everywhere in our modern lives... This is an audiobook to appreciate on many levels, most of all, to hear the sound of Latin again, so familiar and so essential to the ear." — AudioFile Magazine

From the acclaimed novelist and Oxford professor Nicola Gardini, a personal and passionate look at the Latin language: its history, its authors, its essential role in education, and its enduring impact on modern life—whether we call it “dead” or not.

What use is Latin? It’s a question we’re often asked by those who see the language of Cicero as no more than a cumbersome heap of ruins, something to remove from the curriculum. In this sustained meditation, Gardini gives us his sincere and brilliant reply: Latin is, quite simply, the means of expression that made us—and continues to make us—who we are. In Latin, the rigorous and inventive thinker Lucretius examined the nature of our world; the poet Propertius told of love and emotion in a dizzying variety of registers; Caesar affirmed man’s capacity to shape reality through reason; Virgil composed the Aeneid, without which we’d see all of Western history in a different light.

In Long Live Latin, Gardini shares his deep love for the language—enriched by his tireless intellectual curiosity—and warmly encourages us to engage with a civilization that has never ceased to exist, because it’s here with us now, whether we know it or not. Thanks to his careful guidance, even without a single lick of Latin grammar readers can discover how this language is still capable of restoring our sense of identity, with a power that only useless things can miraculously express.