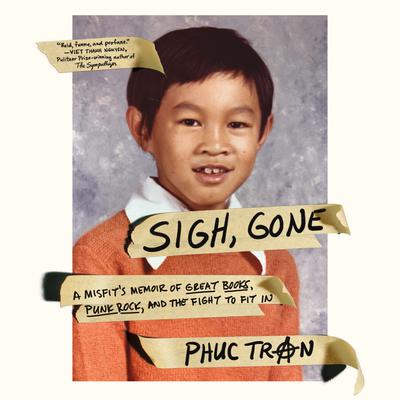 A Misfit's Memoir of Great Books, Punk Rock, and the Fight to Fit In

"Tran's story is an American immigration story, and so much more. His delivery is crisp and engaging, and maintains just the slightest element of whimsy...If you're a fan of memoirs and a fan of literature, this is a must- listen." -- AudioFile Magazine

For anyone who has ever felt like they don't belong, Sigh, Gone shares an irreverent, funny, and moving tale of displacement and assimilation woven together with poignant themes from beloved works of classic literature.

In 1975, during the fall of Saigon, Phuc Tran immigrates to America along with his family. By sheer chance they land in Carlisle, Pennsylvania, a small town where the Trans struggle to assimilate into their new life. In this coming-of-age memoir told through the themes of great books such as The Metamorphosis, The Scarlet Letter, The Iliad, and more, Tran navigates the push and pull of finding and accepting himself despite the challenges of immigration, feelings of isolation, and teenage rebellion, all while attempting to meet the rigid expectations set by his immigrant parents.

Appealing to fans of coming-of-age memoirs such as Fresh Off the Boat, Running with Scissors, or tales of assimilation like Viet Thanh Nguyen's The Displaced and The Refugees, Sigh, Gone explores one man’s bewildering experiences of abuse, racism, and tragedy and reveals redemption and connection in books and punk rock. Against the hairspray-and-synthesizer backdrop of the ‘80s, he finds solace and kinship in the wisdom of classic literature, and in the subculture of punk rock, he finds affirmation and echoes of his disaffection. In his journey for self-discovery Tran ultimately finds refuge and inspiration in the art that shapes—and ultimately saves—him.

“The United States was already a better country because Phuc Tran refused to change his name. Then he went even further in changing this country by giving us this bold, funny, and profane memoir: a portrait of a young punk refugee and of heartland America itself, each of them as defiant and compelling as the other.” — Viet Thanh Nguyen, author of the Pulitzer Prize winner The Sympathizer and The Refugees

"...going aural is your recommended medium because Tran also makes his narrating debut—prefaced by an actual drumroll, yes!—with energy, empathy, and plenty of curse words, as he shares his no-holds-barred coming-of-age journey in small-town Carlisle, Pennsylvania" -- Booklist, starred review