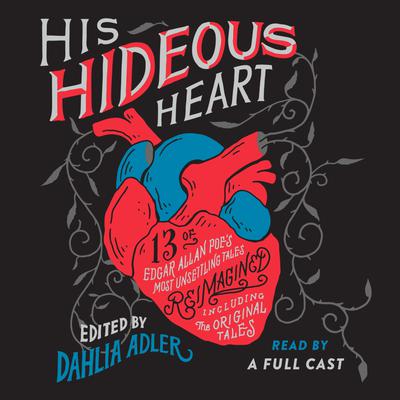 “I already enjoy Edgar Allen Poe and his Gothic darkness, and this collection of modern writers choosing a Poe classic was something fresh and interesting. After many of the stories (and one poem), I had to stop to absorb and process before moving on to the next. Sometimes for many days, they were so genuinely thrilling and disturbing. Beautiful, funny, surprising, and affecting, I think Poe would read many of these and see himself in them. On the audiobook, each story was read by a different voice, which was a perfect way to set off each writer's style.”

"His Hideous Heart is an audiobook dream. Half of the stories are read by their authors and the other half are read by professional narrators; all are delightful and, of course, haunting." -- Paste

Thirteen of YA’s most celebrated names reimagine Edgar Allan Poe’s most surprising, unsettling, and popular tales for a new generation.

Edgar Allan Poe may be a hundred and fifty years beyond this world, but the themes of his beloved works have much in common with modern young adult fiction. Whether the stories are familiar or discovered for the first time, listeners will revel in both Edgar Allan Poe's classic tales, and in the 13 unique and unforgettable ways that they've been brought to life.

Praise for His Hideous Heart:

"Adler’s anthology brims over with fierce delight and uncanny invention...if you haven’t read Poe before, 'His Hideous Heart' works equally well as an introduction, a tribute and a loving critique." -- The New York Times Book Review