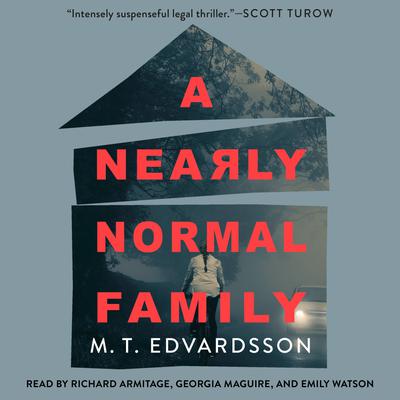 “A Nearly Normal Family is a slow-burning legal thriller that had me listening to it every free moment I had. There are three narrators in the twisted family drama - the Father, the Daughter, and the Mother. They each tell their own version of the time and events. There is a difference though. Each weaves his/her story with lies and deception. The core of the plot centers around the 16-year-old daughter who is accused of murdering a man twice her age. The father of the accused is a pastor and the mother is a lawyer. The reader must decipher truth among the lies and cover-ups. There are quite a few twists and turns along the way. I enjoyed this very much. I found myself thinking about it throughout the day and couldn't wait to get back to it. The narration is top-notch. I highly recommend this book and I look forward to reading more books by the author.”

New York Times Book Review recommends M.T. Edvardsson’s A Nearly Normal Family and lauds it as a “page-turner” that forces the reader to confront “the compromises we make with ourselves to be the people we believe our beloveds expect.” (NYTimes Book Review Summer Reading Issue)

M.T. Edvardsson’s A Nearly Normal Family is a gripping legal thriller that forces the listener to consider: How far would you go to protect the ones you love? In this twisted narrative of love and murder, a horrific crime makes a seemingly normal family question everything they thought they knew about their life—and one another.

Eighteen-year-old Stella Sandell stands accused of the brutal murder of a man almost fifteen years her senior. She is an ordinary teenager from an upstanding local family. What reason could she have to know a shady businessman, let alone to kill him?

Stella’s father, a pastor, and mother, a criminal defense attorney, find their moral compasses tested as they defend their daughter, while struggling to understand why she is a suspect. Told in an unusual three-part structure, A Nearly Normal Family asks the questions: How well do you know your own children? How far would you go to protect them?