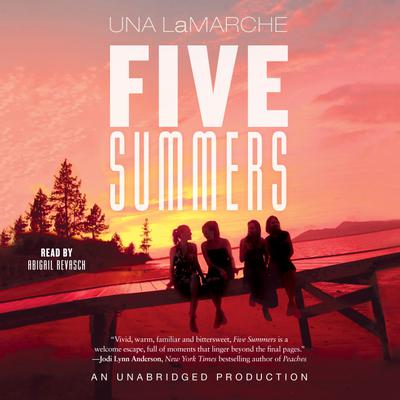 Bittersweet, funny, and achingly honest, Five Summers is a story of friendship, love, and growing up that is perfect for fans of Ann Brashare's The Sisterhood of the Traveling Pants  and Judy Blume's Summer Sisters.
Four best friends, five summers of camp memories

Emma, Skylar, Jo and Maddie have all come back to camp for a weekend of tipsy canoe trips to the island, midnight skinny dipping in the lake, and an epic game of capture the flag--boys versus girls. But the weekend isn't quite as sunwashed as they'd imagined as the memories come flooding back...

The summer we were nine: Emma was branded “Skylar’s friend Emma” by the infamous Adam Loring . . .

The summer we were ten: Maddie realized she was too far into her lies to think about telling the truth . . .

The summer we were eleven: Johanna totally freaked out during her first game of Spin the Bottle . . .

The summer we were twelve: Skylar’s love letters from her boyfriend back home were exciting to all of us—except Skylar . . .

Our last summer together: Emma and Adam almost kissed. Jo found out Maddie’s secret. Skylar did something unthinkable...and whether we knew it then or not, five summers of friendship began to fall apart.

A young adult book with a friendship story that will last long after the last s'more is gone.