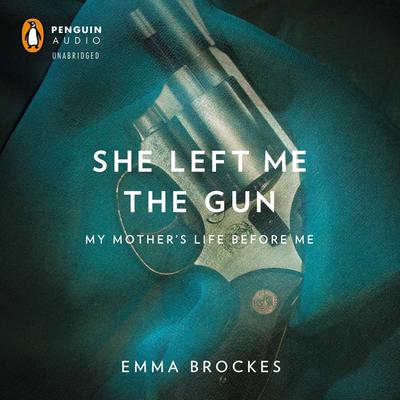 She Left Me the Gun

“One day I will tell you the story of my life,” promises Emma Brockes’s mother, “and you will be amazed.” Despite her mother’s tales of a rustic childhood in South Africa and bohemian years in London, Brockes grew up knowing that some crucial pieces of the past were left unspoken. A mystery to her friends and family, Brockes’s mother, Paula, was glamorous, no-nonsense, and totally out of place in their quaint English village. What compelled her to emigrate to England was never explained, nor what empowered her tremendous strengths and strange fears. Looking to unearth the truth after Paula’s death, Brockes begins a dangerous journey into the land—and the life—her mother fled from years before.

She Left Me the Gun: My Mother's Life Before Me is a tale of true transformation, the story of a young woman who reinvented herself so completely that her previous life seemed to simply vanish—and of a daughter who transcends her mother’s fears and reclaims an abandoned past. Brockes soon learns that Paula’s father was a drunk megalomaniac who terrorized Paula and her seven half siblings for years. He is ultimately taken to court and vindicated of all charges—but not before Paula shoots him five times, and fails to kill him. She books passage to London, never to return.

She Left Me the Gun carries Brockes to South Africa to meet her seven aunts and uncles, to weigh their stories against her mother’s silences, and to understand one of the world’s most beautiful yet bloody countries. Brockes learns of the violent pathologies and racial propaganda in which her grandfather was inculcated, sees the mine shafts and train yards where he worked as an itinerant mechanic, and finds buried in government archives the startling court records that prove he was secretly imprisoned for murder years before he first married.

An extraordinary work of psychological suspense and forensic memoir, She Left Me the Gun chronicles Brockes’s efforts to walk the knife edge between understanding her mother’s unspeakable traumas and embracing the happiness she chose for herself and her daughter.