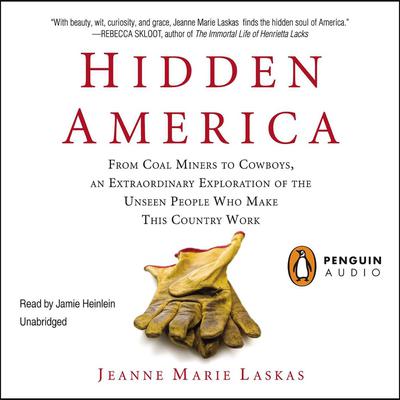 From Coal Miners to Cowboys, an Extraordinary Exploration of the Unseen People Who Make This Country Work

Five hundred feet underground, Jeanne Marie Laskas asked a coal miner named Smitty, “Do you think it’s weird that people know so little about you?” He replied, “I don’t think people know too much about the way the whole damn country works.”

Hidden America intends to fix that. Like John McPhee and Susan Orlean, Laskas dives deep into her subjects and emerges with character-driven narratives that are gripping, funny, and revelatory. In Hidden America, the stories are about the people who make our lives run every day—and yet we barely think of them.

Laskas spent weeks in an Ohio coal mine and on an Alaskan oil rig; in a Maine migrant labor camp, a Texas beef ranch, the air traffic control tower at New York’s LaGuardia Airport,
a California landfill, an Arizona gun shop, the cab of a long-haul truck in Iowa, and the stadium of the Cincinnati Ben-Gals cheerleaders. Cheerleaders? Yes. They, too, are hidden America, and you will be amazed by what Laskas tells you about them: hidden no longer.