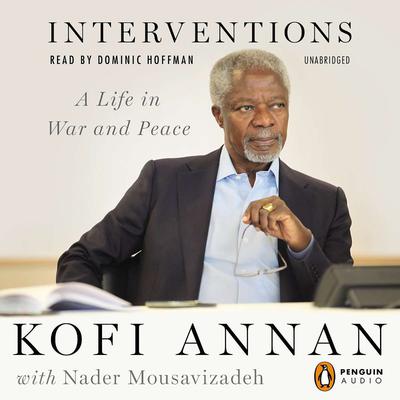 A Life in War and Peace


INTERVENTIONS is the inside story of a world at the brink. After forty years of service in the United Nations, former Secretary-General Kofi Annan shares his unique perspective of the terrorist attacks of September 11; the American invasions of Iraq and Afghanistan; the wars among Israel, Hezbollah, and Lebanon; the humanitarian tragedies of Somalia, Rwanda, and Bosnia; and the geopolitical transformations following the Cold War. With eloquence and unprecedented candor, Annan finally reveals his unique role and unparalleled perspective on decades of global politics.

The first sub-Saharan African national to hold the position of secretary-general, Annan has led an incredible life, an amazing story in its own right. Annan’s idealism and personal politics were forged in the Ghana independence movements of his adolescence, when all of Africa seemed to be waking from centuries of imperial slumber. Schooled in Minnesota, Massachusetts, and Europe, Annan ultimately joined the United Nations in Geneva as the lowest level civil servant in the still young organization. Yet Annan rose rapidly through the ranks, and by the end of the Cold War he was prominently placed in the rapidly changing department of peacekeeping.

As Annan shows the successes of the United Nations around the world, he also reveals the organization’s missed opportunities and ongoing challenges—thwarted actions in the Rwanda genocide, continuing violence between Israelis and Palestinians, the endurance of endemic poverty, and much else. Yet Annan’s great strength in this book is his ability to embed these tragedies within the context of global politics; demonstrating how, time and again, the nations of the world have retreated from the UN’s radical mandate. Ultimately, Annan shows readers a world in which solutions are always available, in which all we lack is the will and courage to see them through.

A personal biography of global statecraft, Annan’s INTERVENTIONS is as much a memoir as it is a guide to world order—past, present, and future.