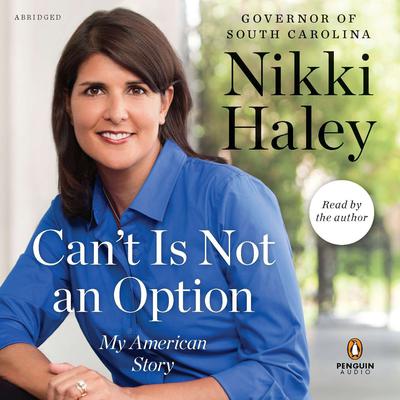 Can't Is Not an Option - Abridged

A rising star in the Republican Party shares her inspirational memoir of family, hope, and the power of the American Dream.

Decades before their daughter surprised the nation by becoming governor of South Carolina, Nikki Haley's parents had a dream. Ajit and Raj Randhawa were well-educated, well-off Sikhs in the Punjab region of India. But despite their high social status, the Randhawas wanted more for their family-the opportunities that only America could offer.

So they left behind all they had known and settled in Bamberg, South Carolina (population: 2,500). As the first Indian family in a small Southern town in the early 1970s, the Randhawas faced ignorance, prejudice, and sometimes blatant hostility. Nikki remembers stopping at a roadside produce stand with her father, who always wore his traditional Sikh turban. Within minutes, two police cars pulled to make sure they weren't thieves.

But the Randhawas taught their children that they should never think of themselves as victims. They stressed that if you work hard and stay true to yourself, you can overcome any obstacle. The key is believing that can't is not an option.

The family struggled to make ends meet while starting a clothing business in their living room, eventually growing it into a multimillion- dollar success. At age twelve, Nikki started to do the bookkeeping and taxes after school. After graduating from college and entering the business world, she watched business owners like her parents battle government bureaucracy and overregulation.

Her frustration inspired her to get into politics and run for the state legislature. That first campaign, against an entrenched incumbent, led to racial and religious slurs and threats-but Haley, like her parents, refused to back down. She won on a promise to fight for reform, lean budgets, and government accountability, which is exactly what she did-much to the dismay of South Carolina's old guard politicians.

Soon she had a reputation as a conservative leader who could get things done. In the same state where her family was once ridiculed, she inspired a diverse grassroots following. In November 2010 she was elected South Carolina's first female governor and first nonwhite governor, and only the second Indian American governor in the country.

Haley's story, as told firsthand in this inspiring memoir, is a testament to the power of determination, faith, and family. And it's proof that the American Dream is still strong and true in the twenty- first century.