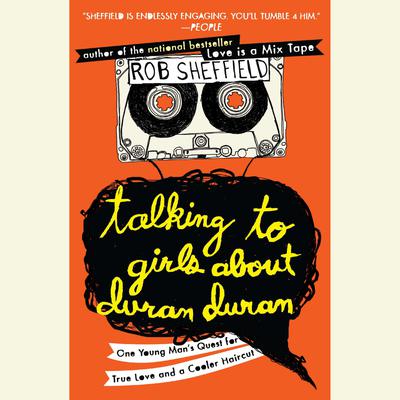 Talking to Girls About Duran Duran

One Young Man's Quest for True Love and a Cooler Haircut

The author of the national bestseller Love is a Mix Tape returns, with a different-but equally personal and equally universal- pin on music as memory."No rock critic-living or dead, American or otherwise-has ever written about pop music with the evocative, hyperpoetic perfectitude of Rob Sheffield."So said Chuck Klosterman about Love is a Mix Tape, Sheffield's paean to a lost love via its soundtrack. Now, in Talking to Girls About Duran Duran, Sheffield shares the soundtrack to his eighties adolescence.When he turned 13 in 1980, Rob Sheffield had a lot to learn about women, love, music and himself, and in Talking to Girls About Duran Duran we get a glimpse into his transformation from pasty, geeky "hermit boy" into a young man with his first girlfriend, his first apartment, and a sense of the world. These were the years of MTV and John Hughes movies; the era of big dreams and bigger shoulder pads; and, like any all-American boy, this one was searching for true love and maybe a cooler haircut. It all here: Inept flirtations. Dumb crushes. Deplorable fashion choices. Members Only jackets. Girls, every last one of whom seems to be madly in love with the bassist of Duran Duran.Sheffield's coming-of-age story is one that we all know, with a playlist that any child of the eighties or anyone who just loves music will sing along with. These songs-and Sheffield's writing-will remind readers of that first kiss, that first car, and the moments that shaped their lives.