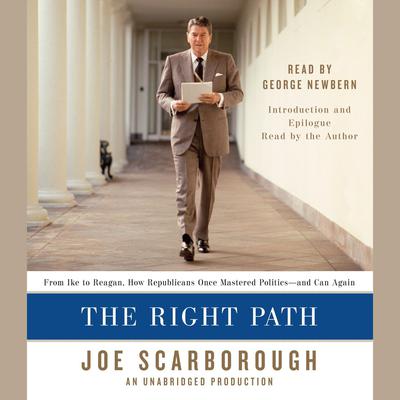 From Ike to Reagan, How Republicans Once Mastered Politics--and Can Again

Joe Scarborough—former Republican congressman and the always insightful host of MSNBC’s Morning Joe—takes a nuanced and surprising look at the unexpected rise and self-inflicted fall of the Republican Party. Dominant in national politics for forty years under the influence of the conservative but pragmatic leadership of Dwight Eisenhower and Ronald Reagan, the GOP, Scarborough argues, is in a self-inflicted eclipse. The only way forward? Recover the principled realism of the giants who led the party to greatness.

In the aftermath of Lyndon Johnson’s 1964 landslide, the Republican Party appeared to be on the verge of permanent irrelevance. LBJ’s Great Society was institutionalizing sweeping liberal reforms, and the United States had a thriving, prosperous economy. Yet in an instant everything changed, and the next four decades would witness an unprecedented era of Republican ascendancy. What happened?

In The Right Path, Joe Scarborough looks back in time to discern how Republicans once dominated American public life. From Eisenhower’s refusal to let “the perfect be the enemy of the good” to Reagan’s charismatic but resolutely practical genius, Scarborough shows how principled pragmatism, combined with a commitment to core conservative values, led to victory after victory.

Now, however, political incalcitrance is threatening to turn a once-mighty party into a permanent minority.

Opening with the passage of the Voting Rights Act in 1965—the high-water moment for liberalism—and ending with the national disillusionment that set in after Hurricane Katrina ravaged New Orleans, The Right Path effortlessly blends American political history with astute analysis and pithy, no-holds-barred commentary. Both a bracing call to arms and a commonsense history, The Right Path provides an illuminating look at conservatism and its discontents—and why the GOP must regain its former tone and tradition if it hopes to survive.

Praise for The Right Path

“This concise history of modern Republican politics might just leave you optimistic about the chances that conservatives can govern again. . . . In the world of commentary, we tend to obsess over the quotidian ebbs and flows—assuming that every little bump in the road is a disaster. . . . But there’s something about reading the history that allows one to take a longer view and put things in context. And that’s precisely what this book does very well.”—The Daily Caller

“The Right Path is the right book at the right time to spark a much-needed conversation about the future of the Republican Party.”—Doris Kearns Goodwin

“If you’re interested in the Republican future, you need to read The Right Path. I don’t agree with all of it, but Joe Scarborough has written a book that’s both thought-provoking and fun.”—William Kristol

“Joe Scarborough’s lively, provocative, and instructive history of the modern Republican Party will stir up the GOP—which is exactly what he has in mind. As the Grand Old Party searches for a path to victory, Joe offers some important lessons to be learned.”—Tom Brokaw