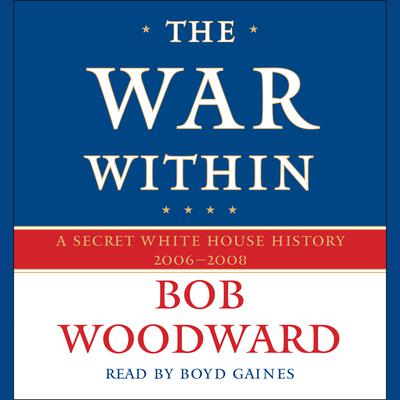 The War Within - Abridged

As violence in Iraq reaches unnerving levels in 2006, a second front in the war rages at the highest levels of the Bush administration. In his fourth book on President George W. Bush, Bob Woodward takes readers deep inside the tensions, secret debates, unofficial backchannels, distrust and determination within the White House, the Pentagon, the State Department, the intelligence agencies and the U.S. military headquarters in Iraq. With unparalleled intimacy and detail, this gripping account of a president at war describes a period of distress and uncertainty within the U.S. government from 2006 through mid-2008.

The White House launches a secret strategy review that excludes the military. General George Casey, the commander in Iraq, believes that President Bush does not understand the war and eventually concludes he has lost the president's confidence. The Joint Chiefs of Staff also conduct a secret strategy review that goes nowhere. On the verge of revolt, they worry that the military will be blamed for a failure in Iraq.

Secretary of State Condoleezza Rice strongly opposes a surge of additional U.S. forces and confronts the president, who replies that her suggestions would lead to failure. The president keeps his decision to fire Secretary of Defense Donald Rumsfeld from Vice President Dick Cheney until two days before he announces it. A retired Army general uses his high-level contacts to shape decisions about the war, as Bush and Cheney use him to deliver sensitive messages outside the chain of command.

For months, the administration's strategy reviews continue in secret, with no deadline and no hurry, in part because public disclosure would harm Republicans in the November 2006 elections. National Security Adviser Stephen J. Hadley tells Rice, "We've got to do it under the radar screen because the electoral season is so hot."

The War Within provides an exhaustive account of the struggles of General David Petraeus, who takes over in Iraq during one of the bleakest and most violent periods of the war. It reveals how breakthroughs in military operations and surveillance account for much of the progress as violence in Iraq plummets in the middle of 2007.

Woodward interviewed key players, obtained dozens of never-before-published documents, and had nearly three hours of exclusive interviews with President Bush. The result is a stunning, firsthand history of the years from mid-2006, when the White House realizes the Iraq strategy is not working, through the decision to surge another 30,000 U.S. troops in 2007, and into mid-2008, when the war becomes a fault line in the presidential election.

The War Within addresses head-on questions of leadership, not just in war but in how we are governed and the dangers of unwarranted secrecy.