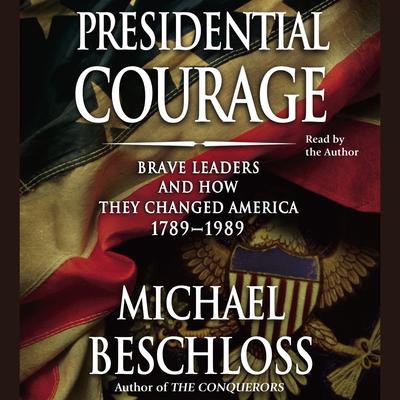 From the acclaimed bestselling author of The Conquerors

Michael Beschloss's dramatic and inspiring saga explores crucial times when a courageous President changed the history of the United States. With surprising new sources and a dazzling command of history and human character, Beschloss brings these flawed, complex men -- and their wives, families, friends and foes -- to life as if in a gripping novel. Never have we had a more intimate, behind-the-scenes view of Presidents coping with the supreme dilemmas of their lives.

In Presidential Courage you will witness George Washington braving threats of impeachment and assassination to make peace with England; John Adams, incurring his party's "unrelenting hatred" by refusing to fight France and warning, "Great is the guilt of an unnecessary war;" Andrew Jackson, in a death struggle against the corrupt Bank of the United States; Abraham Lincoln, risking his Presidency to insist that slaves be freed, as well as the crushing ordeals faced by Theodore and Franklin Roosevelt, Harry Truman, John Kennedy, and Ronald Reagan.

As Beschloss shows, none of these Presidents was eager to incur ridicule, vilification or threats of political destruction and even assassination. But in the end, each ultimately proved himself to be, in Andrew Jackson's words, "born for the storm."