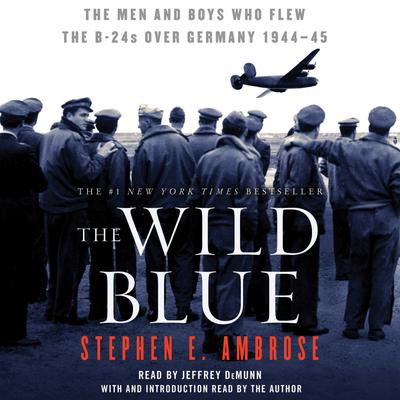 The Men and Boys Who Flew the B-24s Over Germany

Stephen E. Ambrose, acclaimed author of Band of Brothers and Undaunted Courage, carries us along in the crowded and dangerous B-24s as their crews fought to destroy the German war machine during World War II.

The young men who flew the B-24s over Germany in World War II fought against horrific odds, and, in The Wild Blue, Ambrose recounts their extraordinary heroism, skill, daring, and comradeship with vivid detail and affection.

Ambrose describes how the Army Air Forces recruited, trained, and selected the elite few who would undertake the most demanding and dangerous jobs in the war. These are the boys—turned pilots, bombardiers, navigators, and gunners of the B-24s—who suffered over fifty percent casualties.

With his remarkable gift for bringing alive the action and tension of combat, Ambrose carries us along in the crowded, uncomfortable, and dangerous B-24s as their crews fought to the death through thick black smoke and deadly flak to reach their targets and destroy the German war machine. Twenty-two-year-old George McGovern, who was to become a United States senator and a presidential candidate, flew thirty-five combat missions (all the Army would allow) and won the Distinguished Flying Cross. We meet him and his mates, his co-pilot killed in action, and crews of other planes. Many went down in flames.

As Band of Brothers and Citizen Soldiers portrayed the bravery and ultimate victory of the American soldiers from Normandy on to Germany, The Wild Blue illustrates the enormous contribution that these young men of the Army Air Forces made to the Allied victory.