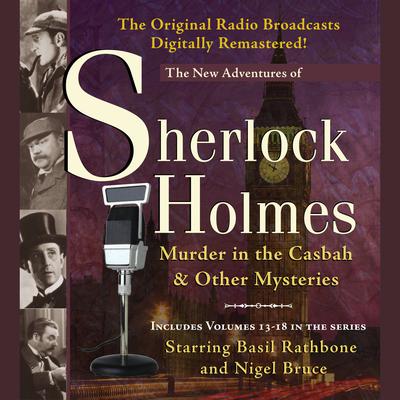 Murder in the Casbah and Other Mysteries - Abridged - Abridged

Welcome to the Golden Age of Radio and the best in classic mystery.
From 1939-1946 Americans gathered around their radio to listen to The New Adventures of Sherlock Holmes -- featuring Basil Rathbone as the high-strung crime solver and Nigel Bruce as his phlegmatic assistant, Dr. Watson.
Witty, fast-paced and always surprising, these great radio plays, written by the prolific writing team of Anthony Boucher and Denis Green, are as fresh today as they were then.
The latest audio technology was employed to bring the best audio quality and fidelity to the original performances, which feature nostalgic wartime announcements, original commercials and radio narrations.
This special CD edition includes:
• Murder in the Casbah and The Tankerville Club
• The Strange Case of the Murderer in Wax and The Man With The Twisted Lip
• The Guileless Gypsy and The Camberville Poisoners
• The Terrifying Cats and The Submarine Cave
• The Living Doll and The Disappearing Scientists
• The Adventure of the Speckled Band and The Purloined Ruby