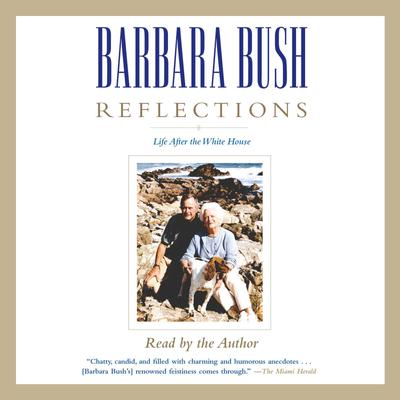 Life After the White House

“There is a myth in the United States—you’ve heard it many times. It says that all American mothers hope that their child will grow up to be President of the United States...” —Barbara Bush

Not since Abigail Adams has one woman been both the wife and mother of presidents. Barbara Bush’s prominent place in American history is matched only by her extraordinary popularity: Republicans and Democrats alike appreciate her wit, her compassion, and her devotion to her family. Dignified, loyal, and unpretentious, the former First Lady defied skeptics to become one of the most admired first ladies in history—and she remains a beloved public figure today.

In this inspiring follow-up to her number-one bestselling memoir, Mrs. Bush covers the momentous eight years between President George H. W. Bush’s leaving office and President George W. Bush’s 2001 inauguration. Reflections comprises Mrs. Bush’s diary entries, travelogues, family photographs, even secret recipes. She discusses her experiences in the White House, on the campaign trail, and in the public eye, as well as her own views about such controversial issues as her husband’s resignation from the NRA, the caning of an American student in Singapore, and—in her candid epilogue—her family’s reactions to September 11, 2001.

Throughout, the extraordinary amount of love and pride Mrs. Bush feels for her husband, five children, and fourteen grandchildren is always clear. Reflections will delight Barbara Bush's millions of admirers with her touching anecdotes and personal revelations from the past decade of a full and fascinating life.