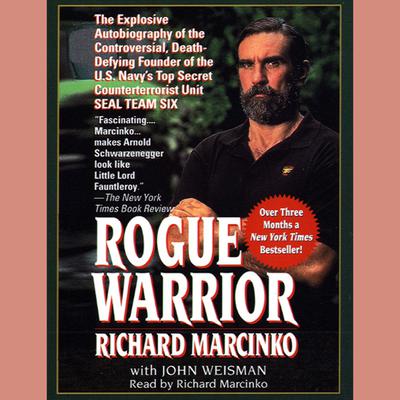 The Rogue Warrior is invading Germany with a blitzkrieg of bravado.  His secret assignment: recover a pair of U.S. ADM’s—Atomic Demolition Munitions—lost in the Rhine Valley.  Yet, what begins as a simple SEAL mission explodes in his face when terrorists visit the cache site.  With scandals at home and fresh hotbeds of political and military tensions igniting all over the world, America’s diplomatic priorities are everywhere but eastern Europe—and the Rogue Warrior and his SEALs must take matters into their own hands.

But not even Marcinko is aware that a cabal of ultranational extremists—led by Lothar Beck, a billionaire defense contractor—is ready to take advantage of the U.S.’s global distractions.  Beck and his subversive cadre believe the time is ripe for their great nation to emerge as Europe’s first superpower—a true Fourth Reich.  They have the money and influence to make it happen.  And thanks to Cold War stockpiling of nuclear and conventional weapons on German soil, they have the arms.

Fortunately Marcinko has some firepower of his own, and the manpower to deliver it the way the God of war intended: with maximum prejudice and extreme efficiency.  He and his elite SEALs will have to wade through tango cells of skinheads, neo-Nazis, Russian mobsters, and Middle Eastern terrorist before they get the scent of the real powerbrokers.  But once they do, it’s time to go hunting—with no bag limit.