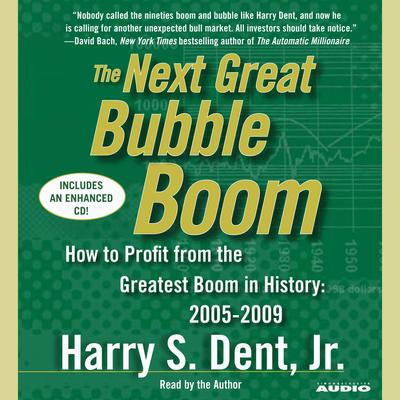 The Next Great Bubble Boom - Abridged

For over 15 years, New York Times bestselling author Harry S. Dent, Jr. has been uncannily accurate in predicting the financial future. In his three previous works, Dent predicted the financial recession of the early 90s, the economic expansion of the mid-90s, and the financial free-for-all of 1998-2000.
The Next Great Bubble Boom offers a comprehensive forecast for the next two decades, showing new models for predicting the future behavior of the economy, inflation, large and small cap stocks, bondsd, key sectors, and more. Dent gives advice on everything from investment strategies to real estate cycles, and shows not only how bright our future will be, but how best to profit from it.
Dent gives us something to look forward to, including:
• The Dow hitting 40,000 by the end of the decade
• The Nasdaq advancing at least ten times from October 2001 lows to around 13,500, and potentially as high as 20,ooo by 2009
• Another strong advance in stocks in 2005 with a significant correction into around September/October 2006
• The Great Boom willl resurge into its final and strongest stage in 2007, and even more fully in 2008, lasting untill late 2009 to early 2010
In The Next Bubble Boom, Dent reveals how the economic growth of the late 1990s was a prelude to the great boom around the corner and how all of us can reap its benefits.