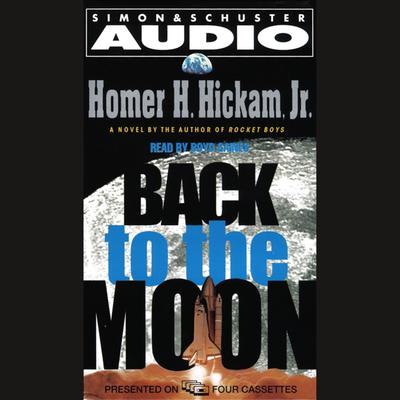 A renegade rocket man haunted by his past. A beautiful daredevil who thinks she can do it all -- until she finds herself on the adventure of her life. A death-defying mission so risky, so audacious, that no one would try it...unless the fate of the world depended on its success.
Thirty years after man's first lunar landing, retired NASA engineer Homer Hickam, Jr., offers a brilliantly imagined, endlessly entertaining return to space adventure in his spectacular first novel, Back to the Moon.
Jack Medaris doesn't "borrow" the space shuttle Columbia to be a hero or a villain. A man of science driven by the memory of the woman who once inspired him, Jack risks his life, his name, and everything he has, to sidetrack the shuttle and take it on an unscheduled detour to the moon, where the secrets of his past -- and the future of the world -- await him. But when the meticulously plotted launch goes fatally wrong, and payload specialist Penny High Eagle further complicates Jack's plan, he must confront unforeseen challenges both in space and on the ground.
Writing with the detail and intelligence that only an insider could, Hickam takes us to places few have ever seen, strapping us into the cockpit of the shuttle and hurtling us into orbit and beyond. From the crackling tension of mission control to the savage emptiness of deep space, from the massive rocket engines capable of generating millions of pounds of thrust to the tiny killing machines awaiting a bygone era's orders to unleash their high-tech fury, here are the sights and science of space as you've never seen them before. A no-holds-barred joyride of a thriller, Back to the Moon confirms that Homer Hickam is a master storyteller like no other.