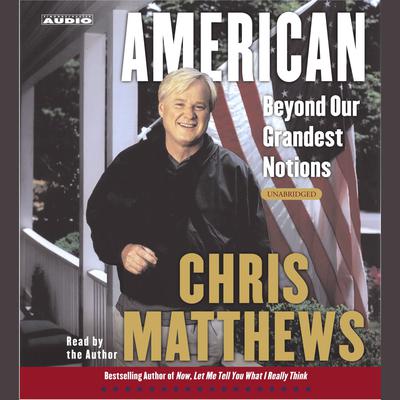 Beyond Our Grandest Notions

From Chris Matthews, former host of MSNBC’s Hardball and NBC’s The Chris Matthews Show, and New York Times bestselling author of Bobby Kennedy, Jack Kennedy, and Tip and the Gipper, comes a definitive work on the lifeblood of America—its enduring spirit.

People have often wondered what makes America truly great. With a citizenry of vastly different races, religions, cultures, and ethnic backgrounds, what intangible bond unites and defines us as "Americans"? In his own inimitable style, Chris Matthews offers a portrait of a country born of contradictions. We are a people reluctant to fight, who become ferocious when threatened or attacked. We are a deeply practical nation, yet we stand as the world's great optimists. Inherently suspicious of governmental power, we still embrace our flag in times of danger. Fiercely independent, in love with freedom, and eager to face the future, we are like no other people on earth.

Matthews asserts that our greatest strength is a set of distinct notions that comprise our national character. The self-made man. The reluctant warrior. The lone hero. We celebrate them in our popular culture and throughout our history, from 1776 to 9/11. In American, Matthews explores the best America stands for and portrays our country as a beacon for the modern world—unafraid of challenges, moving ever forward, and ready and willing to prevail.