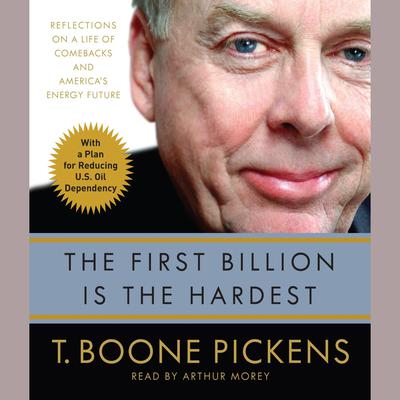 The First Billion Is the Hardest - Abridged - Abridged

Reflections on a Life of Comebacks and America's Energy Future

With a Plan for Reducing U.S. Oil Dependency

It’s never too late to top your personal best.

Now eighty years old, T. Boone Pickens is a legendary figure in the business world. Known as the “Oracle of Oil” because of his uncanny ability to predict the direction of fuel prices, he built Mesa Petroleum, one of the largest independent oil companies in the United States, from a $2,500 investment. In the 1980s, Pickens became a household name when he executed a series of unsolicited buyout bids for undervalued oil companies, in the process reinventing the notion of shareholders’ rights. Even his failures were successful in that they forced risk-averse managers to reconsider the way they did business.

When Pickens left Mesa at age sixty-eight after a spectacular downward spiral in the company’s profits, many counted him out. Indeed, what followed for him was a painful divorce, clinical depression, a temporary inability to predict the movement of energy prices, and the loss of 90 percent of his investing capital. But Pickens was far from out.

From that personal and professional nadir, Pickens staged one of the most impressive comebacks in the industry, turning his investment fund’s remaining $3 million into $8 billion in profit in just a few years. That made him, at age seventy-seven, the world’s second-highest-paid hedge fund manager. But he wasn’t done yet. Today, Pickens is making some of the world’s most colossal energy bets. If he has his way, most of America’s cars will eventually run on natural gas, and vast swaths of the nation’s prairie land will become places where wind can be harnessed for power generation. Currently no less bold than he was decades ago when he single-handedly transformed America’s oil industry, Pickens is staking billions on the conviction that he knows what’s coming. In this book, he spells out that future in detail, not only presenting a comprehensive plan for American energy independence but also providing a fascinating glimpse into key resources such as water—yet another area where he is putting billions on the line.

From a businessman who is extraordinarily humble yet is considered one of the world’s most visionary, The First Billion Is the Hardest is both a riveting account of a life spent pulling off improbable triumphs and a report back from the front of the global energy and natural-resource wars—of vital interest to anyone who has a stake in America’s future.