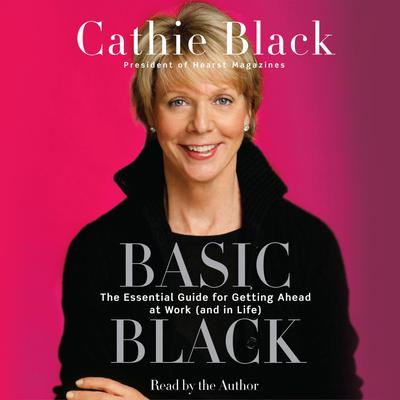 The Essential Guide for Getting Ahead at Work (and in Life)

Cathie Black is the wise, funny mentor that every woman dreams of having. She was a pioneer in advertising sales at a time when women didn’t sell; served as president and publisher of the fledgling USA Today; and, in her current position as the president of Hearst Magazines, persuaded Oprah to launch a magazine. In 2006 she was named one of Fortune’s “50 Most Powerful Women in American Business” for the seventh consecutive year. Now, in the exuberant, down-to-earth voice that is her trademark, Cathie explains how she achieved “the 360° life”—a blend of professional accomplishment and personal contentment—and how any woman can seize opportunity in the workplace.

No matter where you are in your career, Basic Black offers invaluable lessons that will help you land the job, promotion, or project you’re vying for. At the core of the book are Cathie’s candid, personal stories. She walks us through her decision to risk dropping a huge ad agency that handled the USA Today campaign in favor of a small boutique agency run by a wild man. (It was a smash.) She admits that her sometimes brusque style once led to a mutiny of staffers at Ms. (She learned to be more flexible in her managerial style.) She offers a clear-eyed look at what happened during the twenty-eight months between the launch and the close of the much-buzzed-about Talk magazine. And throughout, she offers fascinating glimpses of media and business personalities, such as Rupert Murdoch, Tina Brown, Frank Bennack, Vic Ganzi, former CosmoGirl! editor Atoosa Rubenstein, Bonnie Fuller, and the legendarily difficult Al Neuharth, founder of USA Today.

Above all, Basic Black is motivating. It provides a close-up look at the keen judgment, perseverance, and optimism that have propelled Cathie Black to the top of her game, along with the kind of straight-up practical advice you get in a one-on-one session with a career coach. You’ll find out how to handle job interviews, which rules to break, and why you should make your life a grudge-free zone. Equally important, you’ll be inspired to pursue your passions and achieve your very best.