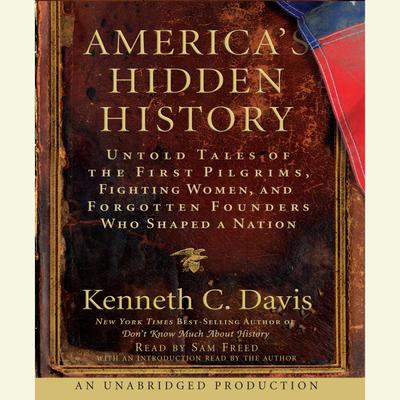 Untold Tales of the First Pilgrims, Fighting Women and Forgotten Founders Who Shaped a Nation

Kenneth C. Davis presents a collection of extraordinary stories, each detailing an overlooked episode that shaped the nation’s destiny and character. Davis’s dramatic narratives set the record straight, busting myths and bringing to light little-known but fascinating facts from a time when the nation’s fate hung in the balance.

Spanning a period from the Spanish arrival in America to George Washington’s inauguration in 1789, America’s Hidden History explores these episodes, among others:

The story of the first real Pilgrims in America, who were wine-making French Huguenots, not dour English Separatists
* The coming-of-age story of Queen Isabella, who suggested that Columbus pack the moving mess hall of pigs, which may have spread disease to many Native Americans
* The long, bloody relationship between the Puritans and Indians that runs counter to the idyllic scene of the Thanksgiving feast
* The little-known story of George Washington as a headstrong young soldier who committed a war crime, signed a confession, and started a war!