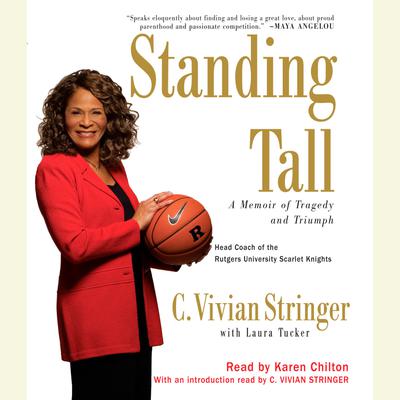 A Memoir of Tragedy and Triumph

“Lots of people have dreams, but C. Vivian Stringer is the dream—a coalminer’s daughter who believed when her Poppa told her there was no obstacle she could not surmount. And she lives that dream, teaching others to rise up to meet challenges, turning underdogs into champions again and again—on and off the court. This is the quintessential American story, of a woman and of a family pulling together against the odds. Standing Tall offers an important message of hope to so many.”
—John Chaney, Hall of Fame college basketball coach


At a time when heroes are too rare, C. Vivian Stringer sets a shining example. She has time and again shown character, fortitude, and heart, both on and off the hardwood, and in the face of unbearable loss. In Standing Tall, she shares her remarkable life story, inspiring us to find this fortitude within ourselves.

“Work hard, and don’t look for excuses,” Stringer’s parents told her, “and you can achieve anything.” But her faith and perseverance would be tested many times. A gifted athlete, she had to fight for a place on an all-white cheerleading squad in the sixties. In 1981, just as her coaching career was taking off, her fourteen-month-old daughter, Nina, was stricken with spinal meningitis. Nina would never walk or talk again. Still grieving, Stringer brought a small, poor, historically black college to the national championships—a triumph hailed as “Hoosiers with an all-female cast.” In 1991, her husband, Bill—her staunchest supporter, the father of her children, and the love of her life—fell dead of a sudden heart attack, but that same year, she led yet another young team to the Final Four. Through these dark times and others—including her bout with cancer, shared here for the first time—Stringer has carried her burdens with grace. Given her history, it was no surprise that she led her team to respond to Don Imus’s slurs with dignity and courage.

Standing Tall is a story of quiet strength in the face of punishing odds. Above all, it is an extraordinary love story—love for the game, for the players she has coached, for her close-knit family, and for the husband she lost far too soon. It will resonate long after the last page.