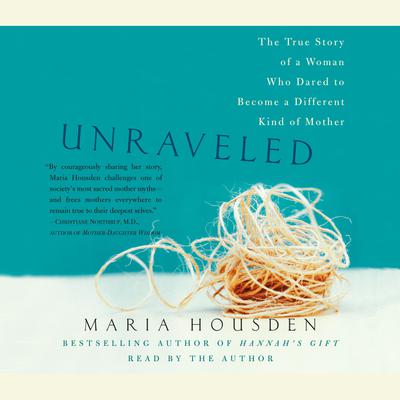 As a twelve-year-old girl, Maria Housden’s vision of a happy future included everything that society expects girls to yearn for: a home, a husband, and, of course, children. Life had other plans.

Unraveled is Housden’s riveting and thoughtful story of how, after the death of her young daughter, she found the courage to break away from her role as a wife and stay-at-home mom and strike out on her own in search of a more fulfilling life. Leaving her three surviving children in the primary custody of her husband, Housden faced down the disbelief of friends and family and began a journey that would ultimately lead her not only to the truth about herself, but also to a deeper and more loving connection with her children.

Housden writes about the emotional reckoning that led to her decision and the ways in which she has become the best mother she can be while no longer living with her children full-time. With fierce honesty and the same gift for poignantly beautiful writing that she demonstrated in the bestselling Hannah’s Gift, Housden makes a valuable contribution to our collective conversation about mothering, marriage, and the assumptions we make about the way life is supposed to be. Unraveled is the remarkable story of one woman’s choice not to live every girl’s dream . . . and instead to find her own.