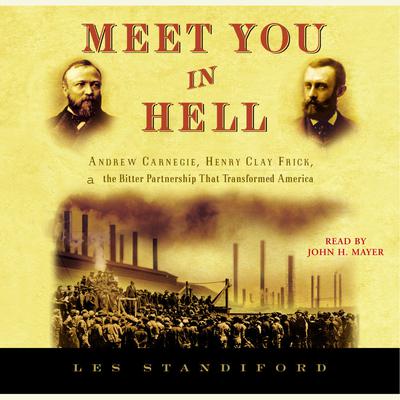 Two founding fathers of American industry. One desire to dominate business at any price.

“Masterful . . . Standiford has a way of making the 1890s resonate with a twenty-first-century audience.”—USA Today

“The narrative is as absorbing as that of any good novel—and as difficult to put down.”—Miami Herald

The author of Last Train to Paradise tells the riveting story of Andrew Carnegie, Henry Clay Frick, and the bloody steelworkers’ strike that transformed their fabled partnership into a furious rivalry. Set against the backdrop of the Gilded Age, Meet You in Hell captures the majesty and danger of steel manufacturing, the rough-and-tumble of the business world, and the fraught relationship between “the world’s richest man” and the ruthless coke magnate to whom he entrusted his companies. The result is an extraordinary work of popular history.

Praise for Meet You in Hell

“To the list of the signal relationships of American history . . . we can add one more: Andrew Carnegie and Henry Clay Frick . . . The tale is deftly set out by Les Standiford.”—Wall Street Journal

“Standiford tells the story with the skills of a novelist . . . a colloquial style that is mindful of William Manchester’s great The Glory and the Dream.”—Pittsburgh Tribune-Review

“A muscular, enthralling read that takes you back to a time when two titans of industry clashed in a battle of wills and egos that had seismic ramifications not only for themselves but for anyone living in the United States, then and now.”—Dennis Lehane, author of Mystic River