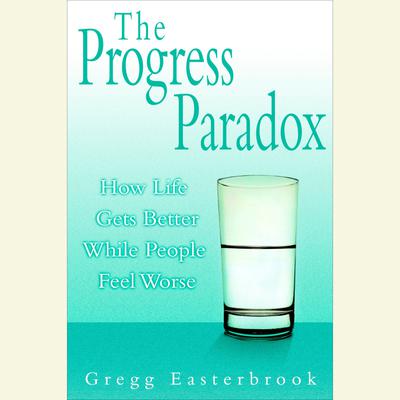 How Life Gets Better While People Feel Worse

In The Progress Paradox, Gregg Easterbrook draws upon three decades of wide-ranging research and thinking to make the persuasive assertion that almost all aspects of Western life have vastly improved in the past century--and yet today, most men and women feel less happy than in previous generations. Why this is so and what we should do about it is the subject of this book.

Between contemporary emphasis on grievances and the fears engendered by 9/11, today it is common to hear it said that life has started downhill, or that our parents had it better. But objectively, almost everyone in today’s United States or European Union lives better than his or her parents did.

Still, studies show that the percentage of the population that is happy has not increased in fifty years, while depression and stress have become ever more prevalent. The Progress Paradox explores why ever-higher living standards don’t seem to make us any happier. Detailing the emerging science of “positive psychology,” which seeks to understand what causes a person’s sense of well-being, Easterbrook offers an alternative to our culture of crisis and complaint. He makes a Compelling case that optimism, gratitude, and acts of forgiveness not only make modern life more fulfilling but are actually in our self-interest.

Seemingly insoluble problems of the past, such as crime in New York City and smog in Los Angeles, have proved more tractable than they were thought to be. Likewise, today’s “impossible” problems, such as global warming and Islamic terrorism, can be tackled too.

Like The Tipping Point, this book offers an affirming and constructive way of seeing the world anew. The Progress Paradox will change the way you think about your place in the world, and about our collective ability to make it better.