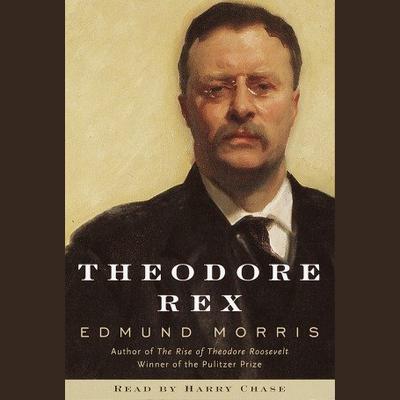 The most eagerly awaited presidential biography in years, Theodore Rex is a sequel to Edmund Morris’s classic bestseller The Rise of Theodore Roosevelt. It begins by following the new President (still the youngest in American history) as he comes down from Mount Marcy, New York, to take his emergency oath of office in Buffalo, one hundred years ago.

Theodore Rex, full of cinematic detail, moves with the exhilarating pace of a novel, yet it rides on a granite base of scholarship. TR’s own voice is constantly heard, as the President was a gifted letter writer and raconteur. Also heard are the many witticisms, sometimes mocking, yet always affectionate, of such Roosevelt intimates as Henry Adams, John Hay, and Elihu Root. (“Theodore is never sober,” said Adams, “only he is drunk with himself and not with rum.”)

Interspersed with many stories of Rooseveltian triumphs are some bitter episodes-notably a devastating lynching-that remind us of America’s deep prejudices and fears. Theodore Rex does not attempt to justify TR’s notorious action following the Brownsville Incident of 1906-his worst mistake as President-but neither does this resolutely honest biography indulge in the easy wisdom of hindsight. It is written throughout in real time, reflecting the world as TR saw it. By the final chapter, as the great “Teddy” prepares to quit the White House in 1909, it will be a hard-hearted reader who does not share the sentiment of Henry Adams: “The old house will seem dull and sad when my Theodore has gone.”