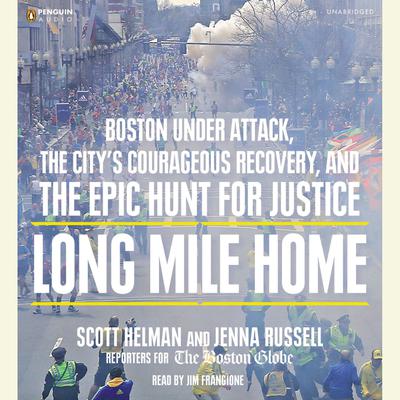 Boston Under Attack, the City's Courageous Recovery, and the Epic Hunt for Justice

The full story of the Boston Marathon bombing, the hunt for the Tsarnaev brothers, and a city's brave response to terror--drawing from Pulitzer Prize-winning coverage of the story in The Boston Globe.

When two bombs exploded at the densely crowded finish line of the Boston Marathon on April 15, 2013, the whole world watched in shock as the story unfolded. First, the death toll and life-altering injuries. Next, the identification of the suspects—Dzhokhar and Tamerlan Tsarnaev—and the tense manhunt that brought Boston to a standstill. And, finally, the courageous and inspiring recovery of a wounded American city.
Long Mile Home is the riveting tale of that tragic, surreal, and ultimately inspiring week. Boston Globe journalists Scott Helman and Jenna Russell tell the full story through the eyes of five principal characters—a police officer, a lost daughter, a determined survivor, a trauma surgeon, and the marathon director—tracing the paths that brought them to a tragic intersection with two murderous brothers on that infamous day in April. Including never-before-told stories, unexpected revelations, and unforgettable moments of heroism and humanity, Long Mile Home is both an absorbing, action-packed narrative and a lasting tribute to the bravery and resiliency of the Boston community.

With a New Afterword by the Authors