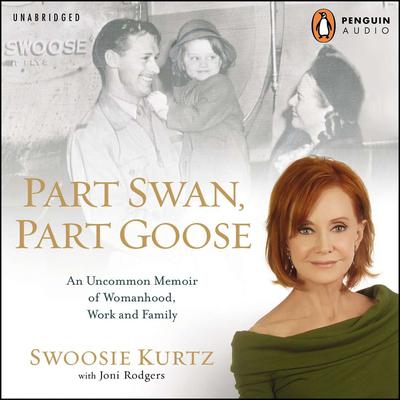 An Uncommon Memoir of Womanhood, Work, and Family

In a wise, warmhearted memoir that celebrates her extraordinary life and stellar career, Swoosie Kurtz shares just the right combination of personal misadventure and showbiz lore, candidly reflecting on the right choices that empowered her, the wrong choices that enlightened her, and the intimate journey of caring for an aging parent.

Animating this remarkable memoir is Swoosie’s relationship with her equally remarkable parents. Her father, Frank, was an Olympic athlete and highly decorated World War II airman. He flew a record number of missions in a cobbled-together B-17D called the Swoose. Her mother, Margo, was the quintessential military wife but with the spunk and will to match her husband’s. Her 1945 memoir, My Rival, the Sky, chronicled their lives up to the time of the birth of their daughter.

Today, Margo, who is fast approaching her hundredth birthday, lives with Swoosie. And Swoosie’s life has become a precarious and precious balancing act as she struggles to stay ahead of her mother’s increasing needs while navigating a showbiz career that keeps one foot in Hollywood and the other on Broadway.


**Includes a PDF of a digital photo gallery

“Inimitable…one of the best comic actors of our time.” —USA Today

“[An] expert comic actress…may just be the most seductive woman on the New York stage right now.” —Charles Isherwood, The New York Times

and “full of surprises…expressive…devastating…unforgettable.” —Ben Brantley, The New York Times