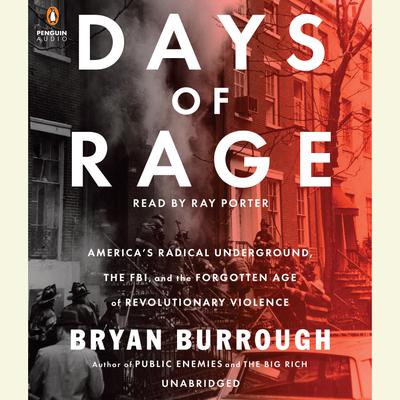 America's Radical Underground, the FBI, and the Forgotten Age of Revolutionary Violence

From the bestselling author of Public Enemies and The Big Rich, an explosive account of the decade-long battle between the FBI and the homegrown revolutionary movements of the 1970s

The Weathermen. The Symbionese Liberation Army. The FALN. The Black Liberation Army. The names seem quaint now, when not forgotten altogether. But there was a stretch of time in America, during the 1970s, when bombings by domestic underground groups were a daily occurrence. The FBI combated these groups and others as nodes in a single revolutionary underground, dedicated to the violent overthrow of the American government.

The FBI’s response to the leftist revolutionary counterculture has not been treated kindly by history, and in hindsight many of its efforts seem almost comically ineffectual, if not criminal in themselves. But part of the extraordinary accomplishment of Bryan Burrough’s Days of Rage is to temper those easy judgments with an understanding of just how deranged these times were, how charged with menace. Burrough re-creates an atmosphere that seems almost unbelievable just forty years later, conjuring a time of native-born radicals, most of them “nice middle-class kids,” smuggling bombs into skyscrapers and detonating them inside the Pentagon and the U.S. Capitol, at a Boston courthouse and a Wall Street restaurant packed with lunchtime diners—radicals robbing dozens of banks and assassinating policemen in New York, San Francisco, Atlanta. The FBI, encouraged to do everything possible to undermine the radical underground, itself broke many laws in its attempts to bring the revolutionaries to justice—often with disastrous consequences.

Benefiting from the extraordinary number of people from the underground and the FBI who speak about their experiences for the first time, Days of Rage is filled with revelations and fresh details about the major revolutionaries and their connections and about the FBI and its desperate efforts to make the bombings stop. The result is a mesmerizing book that takes us into the hearts and minds of homegrown terrorists and federal agents alike and weaves their stories into a spellbinding secret history of the 1970s.