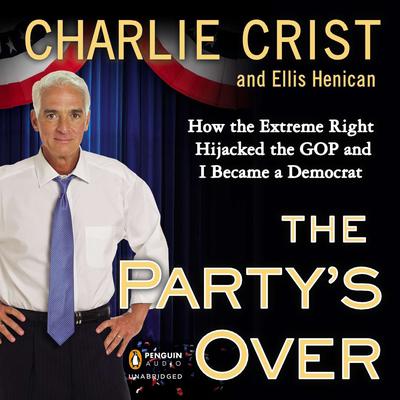 Charlie Crist, the former Republican governor of Florida, spent years in the party’s inner circle. In this no-holds-barred memoir, he shows why he switched sides and became a Democrat.

After serving as a Republican governor—one who was on the short list for the vice presidency in 2008—Charlie Crist made headlines when he decided to run for the U.S. Senate as an Independent. He was on the front page again when he endorsed President Obama in 2012 and spoke at the Democratic National Convention—and yet again when he officially joined the Democratic Party later that year. In The Party’s Over, he’ll make even more news when he reveals:

•  The inside story of his 2010 Senate primary campaign against Marco Rubio, where he learned exactly how vicious the Republican leadership can be.
•  His journey from inner circle to persona non grata, thanks to his literal embrace of President Obama.
•  His very frank opinions on Marco Rubio, Jeb Bush, Mitt Romney, Sarah Palin, and other top-tier Republicans.
•  Why he believes that Democrats have the right vision for Florida and the nation.
• What he’s learned as a member of both parties and why he remains convinced that the two-party system can still work—with the right leadership.

Rather than just rehashing his career, in this book Crist offers a focused indictment of the failings of the Republican Party, naming names and identifying where things went wrong. The Party’s Over is as far from “politics as usual” as you can get.